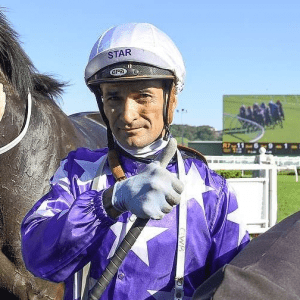 Corey talks of the frustration as he struggles with his slow-healing spinal injuries.

He recalls the Queensland Derby fall that shattered his T7 vertabra and the subsequent major surgery.

The champion jockey reflects on his great career and the Kempsey fall he suffered at his very first race ride.

Corey talks about his first Melbourne Cup win on Shocking in 2009. He remembers everything going wrong in the race but says the horse was able to get away with it.

He takes us through his second Cup win on Rekindling in 2017 and the thrill of having his wife Kylie and three daughters at Flemington to share his happiness.

Corey reflects on that special day when he won three Gr 1 races at Royal Randwick.

He pays a heartfelt tribute to the amazing Apache Cat and the five consecutive Gr 1’s he won on the enormously popular sprinter.

Corey recalls his 18 months stint with Lee Freedman on the Mornington Peninsula.

The champion jockey talks of his involvement with Channel 7 and Racing.com during last year’s spring carnival. He reflects on the Sky programme “Off The Rails” which got him started in the racing media.