THE YANKS CALLED HIM ‘THE BIG TRAIN FROM THE ANTIPODES’ 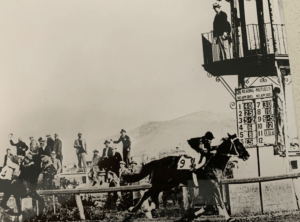 I never get tired of looking at this one.

The great Phar Lap with a near side front “quarter crack” oozing blood, careers away to win the Agua Caliente Hcp in Tijuana Mexico March 20th, 1932.

This race carried a purse of $100,000, an incomprehensible amount of money in that era. Speculation was rife that Phar Lap would be impeded by opposing runners in the race. To avoid the likelihood of trouble, caretaker trainer Tommy Woodcock instructed jockey Billy Elliott to keep away from them no matter how wide he had to travel.

Phar Lap was travelling in the middle of the track at the 6 furlongs marker when Elliott made a lightning move. By the time they got to the half mile, Phar lap had crossed to the lead, but had burned plenty of petrol.

For one unthinkable moment on the hometurn Reveille Boy looked likely to make a race of it and Aussie supporters were anxious. After all, there was the matter of a nasty quarter crack, and the big “red” horse had actually sprinted for two furlongs in the back straight.

Those questions were answered in a heartbeat when Elliott asked for more. Three giant bounds and Phar Lap was away. Look at the official (probably a steward) with the bird’s eye view from the tower with the betting board showing Phar Lap at 6/5.

Note the excitement of the privileged few on the infield. They were part of a 50,000 strong crowd. What an enormous thrill for Australian jockey Billy Elliott who gained the coveted ride when Jim Pike declined the offer to go to the USA. Bill had won 5 races on Phar Lap at home, when Pike was unable to make the weight.

What a triumph it was for the man who knew Phar Lap better than any other person on the planet – the universally loved Tommy Woodcock.

Legendary Australian writer Bert Wolfe was sent by the Melbourne Herald to cover the great race. Here is an excerpt from his report. “It is impossible to describe the scene at the finish of the race. The crowd cheered itself hoarse, the paddock seethed with excitement, and when he returned to the winner’s circle, pandemonium reigned”.

Who could have said it better than the man who wrote about racing under the pseudonym of “Cardigan”.

Fifteen days after his historic win in Mexico, the horse who had raised the spirits of Australians through the Great Depression died in California.