One from the Archives

Steve Hart can pull a rabbit out of a hat, when it comes to old photos. Somehow he came up with this classic shot of Tommy Woodcock and jockey Pat Trotter shortly before Reckless contested the 1977 Melbourne Cup. 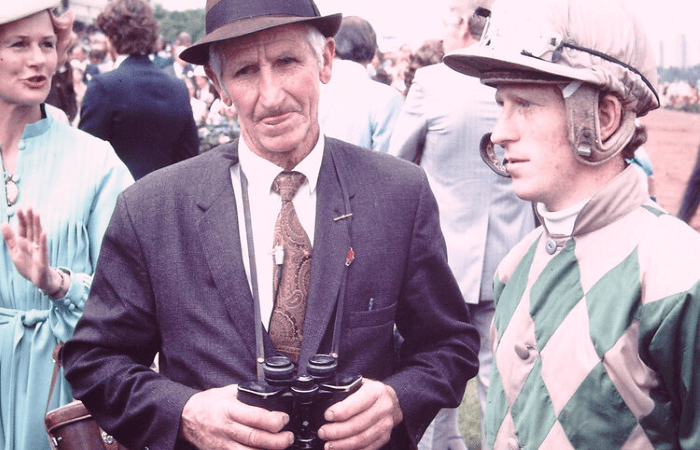 It was exactly 47 years after Tommy’s beloved Phar Lap had won his Cup at 8/11 – the shortest priced Cup winner in history. The slow maturing Reckless took 34 starts to win his first race – a 2500m event at Flemington. He struck form in the Spring of 76 to win the time honoured Hotham Hcp, and followed up with a game 4th to Van Der Hum on an atrocious track in the Melbourne Cup.

In the autumn of 1977 he put together a stunning sequence of wins – the Sydney Cup, the Flemington Shaggy Ridge Hcp, the Adelaide Cup and Brisbane Cup. Pat Trotter was his jockey in the three Cup wins. Following a spell he returned for just six more runs as a Spring 7YO. After three unplaced efforts he beat all but Gold And Black in the Melbourne Cup, again with Trotter in the saddle.

He won the Robertson hcp at Flemington before heading west for the Perth Cup. He was a gallant third in the Cup but pulled up noticeably lame and was retired immediately by his ever vigilant trainer. The emergence of Reckless as a specialist two miler in the mid 1970’s triggered a wave of publicity for his much loved trainer Tommy Woodcock.

It brought the veteran horseman back into the spotlight four decades after the glory days of his old mate Phar Lap.