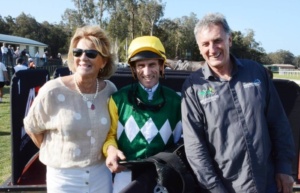 Tuncurry Forster Jockey Club president Gary McQuillan reckons Australians don’t need much of an excuse to have a long weekend, and it was certainly true for last Friday’s XXXX Gold Cup Day, with the club attracting the biggest crowd it’s seen since its inaugural race meeting back in 2008.

More than 3000 people poured through the gates for a day of fine weather, enjoyable social catch-ups and high-quality country racing, with the 2200m XXXX Gold Cup sponsored by L & B Glass and Aluminium and the 1200m Evermore Pearl sponsored by Broken Bay Pearls the premier fixtures of the day.

“I couldn’t be more pleased.”

Mr McQuillan said the standard of horses across the meet was fantastic, and with the track in great shape, it made for a day of highly-competitive racing.

Apart from the racing, legendary race caller Johnny Tapp’s appearance as the guest of honour was also a hit with the crowd.

“He’s such a gentleman; he spoke to everyone. He had a fantastic time.”

Mr McQuillan said Mr Tapp enjoyed himself so much he entertained the idea of returning next year to run a Calcutta with well-known former jockey and trainer, Allan Scorse.

Suffice to say, it’s a prospect Mr McQuillan would more than welcome.

For now though he’s more than happy with the success of this latest meet, praising the crowd for their good behaviour and thanking his team of volunteers for another big effort.

“It was an enormous day,” he said.