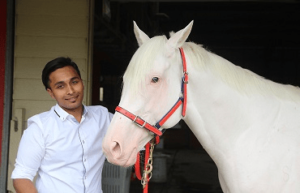 Late on a Sunday afternoon you’ll often find Nigil Mohanan walking through trainer Gwenda Markwell’s stables, spending as much time with the horses as he can. Or watching race replays, with a drink in hand, sometimes with a horse peering over his shoulder to review their performance together.

What you wouldn’t know about this 29-year-old is he has a Masters degree in Mechanical Engineering and turned his back on a career in that field when he discovered a passion for horse power of a very different kind. That passion has reached a stage where Markwell, leading trainer at Kembla Grange for many years, is passing on her knowledge so the young man from Kerala in south west India can one day become a trainer himself.

Mohanan’s unlikely path from being part of his father’s transport business in India to wanting to train racehorses in Australia took a turn about five years ago when he sought a part time job at Markwell’s stable simply because he likes animals.

“It was hard for me when I started here because I love animals but I just started for pocket money and I’d never touched a horse,” he said. “I did a Bachelor in Mechanical Engineering in India then I worked in Thailand for eight months. I thought I’d do Mining Engineering at the University of Wollongong but I finished one year I thought I couldn’t do mining any more so had to change back to mechanical.”

“Everyone said it was easy to get a job when you went abroad. If you could do higher education you would be well paid and there were plenty of jobs. It’s hard to run a business in India because of union strikes and everything. It’s too much of a headache so I thought I’d come to Australia, complete my studies and try to get a job and settle here.”

When he started working for Markwell it was about 16 hours a week doing basic stablehand work, grooming, mucking out boxes, washing and walking horses. He must have made an impression on the trainer because once Mohanan finished his degree she offered him a full time job.

It wasn’t the job his parents were expecting him to snare upon completion of that Masters in Mechanical Engineering and it’s safe to say his father didn’t approve. “I wouldn’t be dealing with horses at home, I had never thought I would want to be a horse trainer when I came here,” he said.