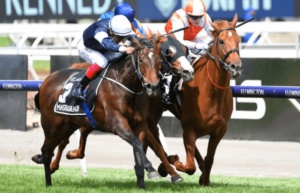 The luckless Melbourne Cup runner Il Paradiso will remain in Australia after local interests bought a majority share in the horse following his third in the Cup.

Il Paradiso was the eye catcher in Tuesday’s Melbourne Cup having missed the jump the UK stayer threaded his way through the field before striking interference in the concluding stages of the race which arguably cost the horse the win.

Following the horses run in the Melbourne Cup local interests struck a deal to buy a majority holding in 4YO trained by Aidan O’Brien.

Melbourne based business man Ozzie Kheir organised a group to buy the controlling interest with Coolmore to retain their interest in the horse which is where he is likely to stand at stud following his racing career.

“It’s a privilege to be able to secure the colt and race him alongside Coolmore,” Kheir told Racing.com.

“He will be raced by partners who also raced Marmelo with me including my brother Victor, Phil Mehrten and John O’Neill.

“The four of us had an absolute blast racing Marmelo over the last three years, watching his races in Europe overnight and nearly completing three Melbourne Cup attempts if it wasn’t for the CT scan saga.

“Il Paradiso is a young horse, he’s only had nine starts and we hope to enjoy the next few years racing him, taking the baton over from Marmelo.

“We’re not only looking to race in Australia but also looking to continue racing abroad like we did with Marmelo.

“We know there were many parties interested in him but we’re grateful Coolmore have decided to pursue us and race the horse together.

“Tom Magnier, who has been an absolute gentleman, is an example of great people in racing and why I love the sport. For somebody in such a powerful position and yet be so down to earth is a credit to him and the Coolmore brand.”

Il Paradiso will be targeted towards the 2020 Melbourne Cup where he is the current equal favourite.