Jamie De Belin Off the Track

What Happened to Jamie De Belin 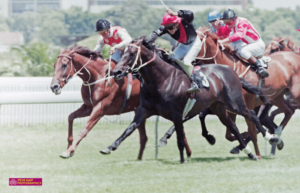 Last week’s Friday Flashback on John Tapp Racing featured a horse called Pablo’s Pulse who carved himself a small piece of racing history when he won the 1987 Warwick Stakes at odds of 500/1.

This noble deed made him the equal longest priced winner in Australian racing history – a distinction achieved five years earlier by a filly called Anntelle at Canterbury. Suffice to say, that joint record remains intact to this day.

By an astounding coincidence both winners were ridden by the same jockey. Jamie De Belin was apprenticed to the late Albert McKenna when he won on Anntelle and was one of Sydney’s lightest jockeys. He was a fully fledged jockey by the time he rode Pablo’s Pulse, but was still feather light. He’s the first to tell you he “fluked” both rides.

I mentioned in the Friday Flashback blurb that Jamie De Belin had disappeared from racing circles years ago and had it not been for the Pablo’s Pulse photo he may have remained incognito.

I was thrilled over the weekend to receive an email from the man himself. Somebody had alerted him to the Friday Flashback segment and he set about making contact with the same sense of purpose that enabled him to get Pablo’s Pulse home in the Group 2.

Jamie De Belin is now 56 years old, many kilograms heavier than he was in the days when he was mixing it with some of the best jockeys in the land. He’s been living in Darwin for over twenty years and has tried his hand at many jobs some of which we’ll outline shortly.

Back to Anntelle. The date was July 3rd 1982 and the Loosen Up filly was one of six runners Tommy Smith saddled up in a two year old event. “My boss Albert McKenna got a phone call from Tulloch Lodge who wanted another of his apprentices Graham Robson to ride Anntelle”, recalls Jamie. “Albert explained Graham had a ride in the race but kicked up for me to ride her and the Smith representative agreed. They obviously thought she had no hope and it really didn’t matter who rode her”.

It was Anntelle’s first start. She had blown from $100.00 to $500.00 and early in the race Jamie thought she was under the odds. “Ron Dufficy and I were joint tailenders in a field of 16 coming to the turn’, recalls De Belin. “I remember saying to Duff that he and I were on a couple of slowcoaches but all that changed when we straightened up. I saved a heap of ground between horses and the runs just kept coming. You couldn’t believe the luck that came her way”.