From Making Millions to Myth-Making 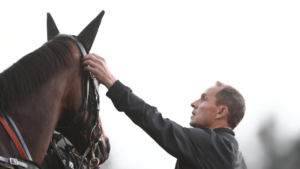 Since moving his racehorse training business to Sydney, Chris Waller has become arguably our greatest ever trans-Tasman sporting export. The dizzying success is based on a simple philosophy of respect and humility, writes Bevan Hurley.

What seemed like a victory procession as Winx lined up for her final race was a time of suffocating pressure for her Kiwi trainer Chris Waller.

His star charge had won 32 races on the trot, and an expectant Australian public demanded a 33rd.

Waller had long ago sensed he was no longer just in the business of winning races and entertaining punters.

Winx was being mentioned in the same breath as Bradman, Freeman and Fraser, the top tier of sporting mythology in a country whose athletes – both two and four legged – are woven into the national identity like nowhere else.

As far as Waller was concerned, she had to win her last race.

On that day in April 2019, rival jockeys snapped selfies with Winx as she was being led around the birdcage at the Royal Randwick course in Sydney.

The champion mare barely acknowledged the huge roar that went out as she was led out of the tunnel underneath the heaving stands.

That day $4m was waged on her on the tote alone, even though she was only paying $1.04 to win in a quality field.

Winning races was one thing, but Winx was also keeping millineries, dressmakers and vineyards in business.

Everyone wanted a piece of her.

As the 2000m race began, Winx was last out of the gates, before settling towards the back of the field. She was up against a top field, which included one-time rival Hartnell, back when she was compared to other horses.