The Story of Aiden St Vincent

IDEN MADE IT TO THE CHURCH ON TIME 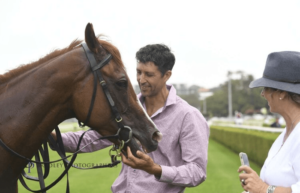 Not even the excitement of his first TAB Highway win could keep Aiden St Vincent away from his regular Sunday morning Church service at Coffs Harbour.

The thirty eight year old trainer and four year old mare Hellenism spent Saturday night at Les Tilley’s Wyong stables, but were on the road again by 4.30am. Aiden never misses the 9.30am Sunday service at the Lifehouse Church and had no intention of letting a Randwick win spoil his attendance record.

He was also anxious to give his best mate, Pastor Steven Lott a full report on Hellenism’s impressive win. “I’d already sent him a link of the race replay, but I knew he’d want to hear every detail of our trip to Royal Randwick”, said Aiden.

The chestnut mare was having only her second race start for St Vincent, and her fifth all up. Brett Dodson had prepared her previously for a win and two placings after which she was sent to the spelling paddock.

Her first up win at Coffs on December 30th had set the tongues wagging. With Rachael Murray on board, Hellenism walked out of the gates and tossed her head several times when eased off heels. She was a conspicuous last on the corner where a composed Murray elected to look for shortcuts. The openings presented themselves and the mare exploded between horses to put them away quickly.

The form specialists were generous in their assessment of the Coffs Harbour win and it was no surprise when Hellenism started favourite in the 1100m Highway. She began well enough from the extreme outside barrier, but Tim Clark elected to go right back when it was obvious she was going to be trapped off the track.

Aiden expected her to have a good look around in the foreign surroundings and how right he was. The mare was hopelessly distracted in the run to the turn, where she was four wide with cover behind All About Me. Just as Conspirator darted through to take the lead at the 200m, Hellenism let down with a dazzling turn of foot and pounced on the leader in a twinkling.

She appeared to switch off after heading Conspirator, obliging Clark to give her another wake up call.