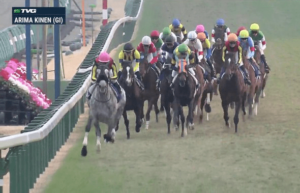 Lys Gracieux the winner of this years Cox Plate was sent out as the $6.50 favourite behind the short priced Almond Eye who failed to run a placing in the race.

Australia’s Damian Lane partnered the star mare who was having her last career start in the race steering her to what was a pretty easy win in the end despite the competition she was up against.

Almond Eye who was sent out at $1.60 with Ladbrokes loomed around the turn but was beaten quickly and dropped out sharply in the concluding stages to finish well back in the field.

Aerolithe led them at a brutal pace, but it was Cox Plate winner Lys Gracieux who soared home late to destroy them in the G1 Arima Kinen! pic.twitter.com/HruSWYECvK